Dance and get fit with Pablo 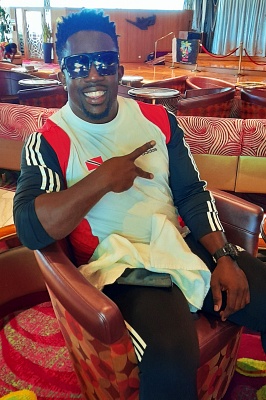 He is fondly known as Pablo, real name, Daniel Phillip. He is a fitness addict that loves to dance.
It was the combining two of his passions, dance and fitness that led to his movement called Fit Addicts.
Pablo was a track athlete in his younger days and it was back in 2006, soca superstar Machel Montano spotted him dancing on stage and approached him and promised to call him.
Pablo recalled, being in awe meeting and conversing with Machel, after their brief conversation he admitted, “Yeah right, whatever…… Machel not going and call me,” but lo and behold the following year Machel did call and invited Pablo to be part of his music videos “Rolling” and “Blazing the Trail”
This was the beginning of a whirlwind dance career that would propel Pablo to new heights, taking him around the world, as one of Machel Montano’s HD dancers.
In 2014 he parted ways with Machel and it was then Fit Addicts Movement was born, “I was always into fitness, running track, so I decided to merge my two loves, creating simple dance moves and integrated a fitness regime, explained Pablo. He added, “The combination is so much fun, lots of people gravitate towards this form of exercise, and I am so grateful for that.”
Pablo is an ambassador of Soca in his own right, he uses all the power soca songs and creates dance/exercise moves and has taken this movement all over the world.
You can truly get addicted to his good vibe and energy as you dance and become a Fit Addict.
Keep up with Pablo :
IG – pablofitaddicts_ravers
FB – ilovemyfamtt