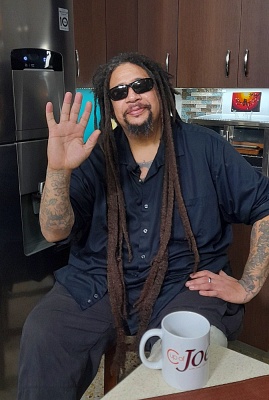 “South Caribbean Music set to dominate the World” – Nigel Rojas
His rugged, raspy voice, in conjunction with his guitar, has been creating musical
magic over 25 years. His mission is to make the world sing and contribute to
making Southern Caribbean Music the next big genre.
Nigel Rojas graced Cup of Joe with his presence and shared his music and a bit of
his story.

It was about 25 years ago Nigel and his brother Nicholas came together and
formed the band Orange Sky. The story behind the name of the band is simple,
but so profound ….
Nigel explained, “At some point in time every single day the sky turns orange,
sometime between sunrise and sunset, and that represents infinity and that’s
Orange Sky’s philosophy … ‘Forever’
His love for the guitar started at a tender age, when he saw Peter Frampton and Bob
Marley on TV and that love intensified when he witnessed Trinidad and Tobago’s
very own Andre Tanker perform live … “It was always about the guy with the
Guitar for me.” “I was about 11 years old, my aunt, who is a nun taught me to play, with the
intention of playing at family functions,” but Nigel added, “My brother Nicholas
and I quickly developed a desire to start a Rock band and head to Hollywood to
perform and thanks to my father, we grew up on a buffet of music, from rock,
reggae and calypso, back then we jammed to the Beatles, Elvis Pressley, Bob
Marley and lots of Calypso music and that has influenced me and it is reflected in
the way I write music.”
Truthfully it is one of the reasons why I always had time for Orange Sky over the
years … Nigel and his band remained true to their roots, true to their ‘Trini-ness’,
they never tried to put on an accent because they were doing predominantly rock
music.
Nigel admitted that is what has made Orange Sky and anomaly, people were
attracted to the band because they were hearing black voices on alternative
music. His love for alternative music never clouded his appeal for calypso and soca and
as a songwriter, he had the privilege to work with the likes of local soca stars Bunji
Garlin, Destra Garcia, Nadia Batson, Ravi B and Patrice Roberts. “I consider myself
lucky to have worked with a cross-section of our local soca stars and I also had the
distinct privilege of co-composing with the great Dr. Len ‘Boogsie’ Sharpe, who is
my absolute hero in every way possible,’ said Rojas.
It’s always been about music for Nigel, his connection to the Guitar is
unbreakable, so much so, he described it as his source of comfort, “If you play an
instrument, you will never be lonely,” he emphasized.
Over the last 25 years, what has kept him motivated? … “It’s like a dangling
carrot,” he says. “I am in pursuit of that ever-elusive dream of attaining a top ten
billboard hit and writing a song that makes the whole world sing … and that is
what keeps me going.” He continued, Music is magic, Music is Mystery and is that
mystery that keeps it fresh, I don’t know what my next song is going to sound like,
but I live for that … when I pray, I pray for the inspiration for my next song.”
He summed up the last 25 years in one word, “JOY, there has been up and downs,
curves and bumps along the road, but these are the chapters of our lives, and I
have learned patience, if you are on chapter 4 in your life, you can’t jump to
Chapter 6 because you want to, that is in the hands of the Almighty, only he could
turn those pages and if you try to swim against that current you will surely
drown.” I enjoyed sharing a cup of ice cream with Nigel Rojas, behind his imposing figure,
he is a gentle giant, a loving father, who loves life and who seems to be very much
still a ‘Mama’s Boy’ who loves his Mummy, all in all Nigel continues to chase his
dreams and fulfill his ambitions.