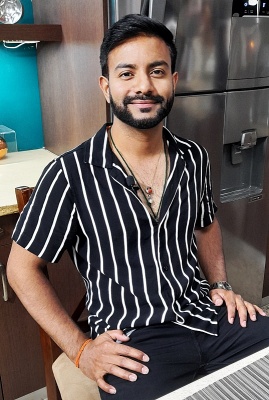 Versatile artist Neval Chatelal chats about being part of the T & T musical talent headed to India to celebrate the monumental Independence celebrations of Trinidad and Tobago (60 yrs) and India (75 yrs) via an upcoming concert to be held in India called Connections. All via ansuravacations.com.

Soca on the Seas heads to India for a joint celebration of Independence
Neval Chatelal will headline a group of artists for a celebratory concert aptly titled CONNECTIONS on an epic
tour of India in September 2022. The tour and concert are the brainchild of Soca
on the Seas promoter Julianna Fermin and will celebrate India’s 75th and Trinidad
and Tobago’s 60th Independence.

The tour will visit iconic landmarks in the Golden Triangle, Agra, Jaipur and the
city of Gold in Dubai and on September 2 nd a grand concert titled ‘Connections’
will be held in New Dehli in collaboration with the Indian Council for Cultural
Relations and will feature Neval Chatelal, Savita Singh, Johann Chuckaree, Terry
Gajraj and Roger George. This tour of India will see the Soca on the Seas brand do its first land-based
adventure, having sailed to 32 ports in the Caribbean, Europe, Middle East and
the Mediterranean, according to Fermin, “We now want to showcase Caribbean
music in other major cities, while visiting a few Wonders of the World that is not
easily accessible by cruise ships.” Former Chutney Soca Monarch Neval Chatelal has been performing with Soca on
the Seas from its inception, back in 2016 and he is thrilled to be leading this cast
to India, “It feels like such an honour to be going to India, holding the flag of
Trinidad and Tobago to represent our music and our culture to the world and
showcase how wonderful and united we are as a people, said Chatelal. He emphasized, “There are a few people in our society unfortunately shouting
division, but the people who are shouting unity, our voices are louder, and we
need to hold hands and shout as loud as we can and sing out against the division.
Neval Chatelal was speaking on his appearance on Cup of Joe Caribbean and sang
one of his songs titled ‘Wonders of the World’, which is dedicated to his beautiful
twin island republic Trinidad and Tobago.

“I was just thinking how amazing this place we call home is, sometimes we take
for granted. We have such beautiful landscape, beautiful flora and fauna, and
most importantly we have such beautiful people.” He proclaimed, “We have such
an opportunity to showcase to the world, what it truly means to be a global citizen, here in T&T we enjoy the cultures of India, Africa, Syria, China, just to name a few, to be a true TRINBAGONIAN you not only represent your identity and your heritage, but you must incorporate all the cultures and the flavours that
make up this Melting Pot, this beautiful country Trinidad and Tobago, truly a
Wonder of this World.”

Get more information/booking on this tour and other upcoming travel adventures: